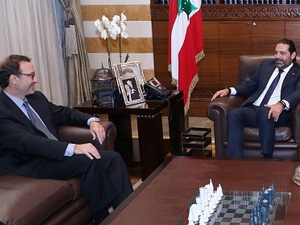 Prime Minister Saad Hariri met Monday evening at the Center House with the U.S. Assistant Secretary of State for Near Eastern Affairs David Schenker, who was accompanied by the U.S. Ambassador to Lebanon Elizabeth Richard.

The meeting was held in the presence of Hariri’s adviser ex-minister Ghattas Khoury. A statement issued by Hariri’s office said discussions focused on “the developments in Lebanon and the region, and the bilateral relations between the two countries.”

The U.S. Embassy in Beirut meanwhile said that Schenker "reaffirmed the importance of preserving Lebanon's security, stability, and sovereignty."

"The Assistant Secretary is conducting a regional tour, including stops in Lebanon, Iraq, Tunisia, Saudi Arabia, and Jordan, with the goal of emphasizing the importance of bilateral relationships and underscoring the United States' deep commitment to continuing to work with its partners and allies toward stability in the Middle East and North Africa," the Embassy said in a statement.

In Lebanon, Schenker will be joined by Deputy Assistant Secretary for Levant Affairs, Joel Rayburn.

The U.S. Embassy statement said Schenker, accompanied by U.S. Ambassador Richard, will also meet with officials from the Lebanese Army. He will also conduct interviews with Lebanese media.

This is Schenker's first visit to Lebanon since taking the post earlier this year.

Both Lebanon and Israel are claiming areas with potentially lucrative offshore gas fields in the Mediterranean Sea.

Lebanon hopes to unleash offshore oil and gas production as it grapples with an economic crisis.