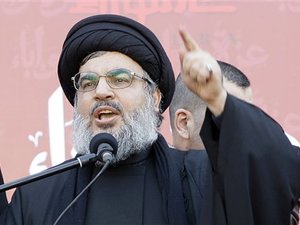 Hizbullah Secretary-General Sayyed Hassan Nasrallah on Monday stressed that Hizbullah and Iran will remain defiant in the face of the growing U.S. pressure.

“We are fighting a grand battle and America and Israel are trying to besiege our camp,” Nasrallah said in brief political remarks during a religious sermon marking the ninth eve of the Shiite Ashoura commemorations.

“Today the leader of our camp is (Iran’s supreme leader) Imam Khamenei… and America is trying to besiege him,” Nasrallah added.

“Tonight and tomorrow we will tell (U.S. President Donald) Trump and (Israeli Prime Minister Benjamin) Netanyahu that we are people whose will cannot be bent by besiegement, sanctions, poverty or hunger,” the Hizbullah leader emphasized.

Nasrallah said he will address the latest political developments in a speech marking the last day of Ashoura on Tuesday morning.

“Today the leader of our camp is (Iran’s supreme leader) Imam Khamenei… and America is trying to besiege him,” Nasrallah added.

If this is not pure treason, then what is!!!

The day this evil iranian sectarian terrorist is brutally and violently murdered is the day we celebrate our true independence.

But hariri and aoun keep telling the world hezbollah and its shia followers are Lebanese:)

You terrorist don't tell daddy anything. Your days are numbered.

Perhaps it is time for the Government of Lebanon to realise that if it really wants to conform to Resolution 1701, it should simply allow Israel a free hand to deal with Hizballah and make sure that as per the resolution there are no armed forces other than LAF south of the Litani.

In your opinion is Donald Trump as good and faithful a slave to owner Putin as Nasrallah is a faithful slave to his owner Khamenei?

That's what Israel declared independence from in 1948: the rule of law.

chrisrushlau - You talk about Israel not having the rule of law.
How about looking in a mirror and see what is happening in your own country, Lebanon (if you are actually living there). One so-called government sitting in Beirut, a terrorist organisation controlling the Beka'a and southern Lebanon and Palestinian gangs operating freely in Ain el Hilwa.
Not to talk about the "rule of law" in Syria - how many hundreds of thousands have been killed there in the civil war? How many millions of refugees?
Then we have Iraq - Shia against Sunni against Kurd against Yezidi.
There is the famous English saying "People who live in glass houses shouldn't throw stones". How appropriate in your case.