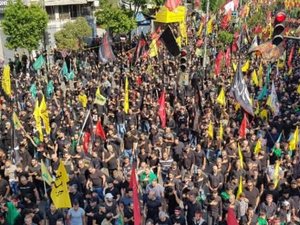 Shiite Muslims around the world are observing Ashoura, one of the most sacred religious holy days for their sect.

Hundreds of thousands of people in Iraq, Iran and Lebanon are marking the day with rallies, prayers and self-flagellation.

Ashoura commemorates the killing of the Prophet Muhammad's grandson, the Imam Hussein, by a rival Muslim faction in Karbala in present day Iraq, in 680 A.D.

Hussein and his descendants are seen by Shiites as the rightful heirs to the prophet. Hussein's killing is attributed with cementing the schism between Shiite and Sunni Islam.

This year's somber commemoration comes amid rising tensions in the Middle East and the crisis between Iran and the U.S. in the wake of the collapsing nuclear deal between Tehran and world powers.

Today marks a special and memorable day for blablablablablabla as thousands of faithful embark on a pilgrimage to penetrate his deep and wide luv tunnel and deposit their loads of lubricants inside it. The occasion marks the ultimate in pleasure and faith for shia all over the world.

Lol i am sure we missed a few

Why do heretics insist on calling themselves Muslims ? Shia, Druze, Alawis aren't muslims. Do Christians call themselves Jews because of the Old Testament? No, of course not.
Self scarification is forbidden because our body isn’t ours, we are obliged to take care of it.

I just came back from Nabatieh where I experienced the most enriching experience of my life. From on-demand tears to self-flagellation, to doing acrobatic latmiyats, to spending time with MFs (Mystic, mowaten and southern) the occasion was nothing short of spectacular. The highlight of the day was when I performed 100 latmiyats on mystic's head and banged his head with a 4x4 until he bled almost to death. I fulfilled my promise to my mahdi who came to me in my dreams two weeks ago. I showed the thousands of fellow shiits the selfie I took with the Mahdi and was proclaimed by them as the 13th twelver. I intend to spread the faith until our beloved Mahdi appears on his yellow horse and make shiism the defacto religion of the universe.

Nothing short of barbarism....