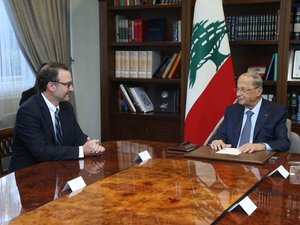 President Michel Aoun on Tuesday told a visiting senior U.S. official that Lebanon is committed to U.N. Security Council Resolution 1701 despite the latest hostilities between Israel and Hizbullah.

“Lebanon is committed to Resolution 1701 while Israel is violating it, and any escalation by it will undermine the stable situation in the border region,” Aoun warned, in a meeting with U.S. Assistant Secretary of State for Near Eastern Affairs David Schenker.

Aoun also hoped the U.S. will resume its mediation for the demarcation of the border between Lebanon and Israel in the South and called on Washington to help Lebanon in facilitating the return of Syrian refugees to their country.

"Lebanon hopes that the United States will continue its mediation efforts... (picking up) where things stopped with envoy David Satterfield," Aoun said.

"We have agreed on many points, only a few sticking points remain," he added.

Schenker said Washington was ready to "renew its efforts," according to a statement released by Aoun's office.

Schenker recently replaced David Satterfield, who had shuffled between Lebanon and Israel in recent months, in an effort to reach a settlement on land and maritime border disputes.

Schenker also stressed to Aoun his country’s keenness on Lebanon’s stability, reassuring that its support for the army and security forces will continue, the Presidency said.

The U.S. official had held a meeting overnight with Prime Minister Saad Hariri upon his arrival in Beirut.

The issue of the shared maritime border is sensitive, mainly because of a dispute over coastal drilling rights.

In February 2018, Lebanon signed its first contract for offshore drilling for oil and gas with a consortium comprising energy giants Total, ENI and Novatek.

Two blocks in the eastern Mediterranean are part of the deal, but Israel claims that part of Block 9 belongs to it.

In recent months, Washington approached both sides to propose that it act as a mediator.

In late May, the Israeli government said it had agreed to enter U.S.-mediated talks with Lebanon to resolve the maritime border dispute.

Aoun “Lebanon is committed to Resolution 1701"
So :
Why are there Hizballah forces south of the Litani?
Why is Hizballah still armed?
Sorry but I don't call that "committed"

Never has Lebanon known or seen a president who needs to be committed as this one, ever!

May France be cursed for harboring this deserter for 15 years and sending him back to destroy Lebanon.