Von der Leyen: Brexit Not the End of British Ties 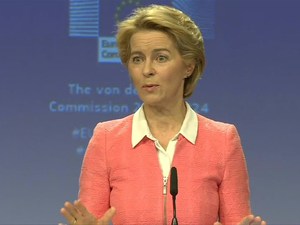 Incoming European Commission president Ursula von der Leyen said Tuesday that Brexit -- "should it happen" -- would be only the start of a new relationship between the UK and the EU, and "not the end."

In an implicit warning to Brexit supporters in the UK arguing for a so-called "clean break" departure from the European Union with no deal in place, she said the two sides would have to work to build up ties anew after the divorce.

"The Brexit, should it happen, is not the end of something but it's the beginning of our future relationship," she said as she named Ireland's Phil Hogan to take charge of EU trade, including post-Brexit talks with Britain on a free trade deal.

The German, who takes office at the helm of the EU's executive team on November 1, told reporters in Brussels she was ensuring a "smooth transition" with the outgoing commission, which has been handling the Brexit issue.

Asked about British Prime Minister Boris Johnson being pressured by his parliament to ask for another extension to Brexit -- a third, to run until the end of January 2020 -- von der Leyen said that entirely up to London.

"The next steps are completely in the hands and the decision of the United Kingdom. So I will not comment on their decisions and the next steps they might take," she said.

"So we'll see how things will proceed."

Britain was initially meant to have left the European Union on March 29 this year following a 2016 referendum that backed Brexit.

But deep political divisions in Britain over what sort of Brexit it wants -- a "soft" one staying close to the vast EU single market or a "hard" one veering clear of its institutions and jurisdiction -- have stymied progress, requiring two delays to the Brexit date so far.

Johnson, who became prime minister in July, has sworn he will take his country out of the European bloc "do or die" by the latest deadline, on October 31. But he has been hamstrung by the UK parliament which has passed a law requiring him to first secure a viable departure deal with the EU.

Even if Britain leaves the EU on October 31, Brexit will hang heavy over von der Leyen's new commission, as a new trading arrangement would have to be worked out between the neighbors.

"I think it is very important to have together a very good free trade agreement, because I think it will be determining the good relations we want to have in the future," von der Leyen said.

She acknowledged though that "we are still in a difficult process."

Irish Prime Minister Leo Varadkar hailed Hogan's appointment, calling it "a definite advantage to have an Irish person in charge of this crucial brief over the next five years."