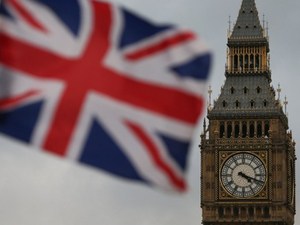 British unemployment has hit a 45-year low, official data showed Tuesday, but the economy still risks falling into a deep recession due to the turmoil created by Brexit.

Here is an assessment of the economy and where it is heading, as Britain prepares to leave the European Union on October 31, with or without a deal according to Prime Minister Boris Johnson.

- How positive is the unemployment data? -

Britain's unemployment rate eased in July to 3.8 percent, down on 3.9 percent in June and the lowest level since currency  1974.

Annual wages growth meanwhile climbed to 4.0 percent, the highest level since 2008, but skewed by bonus payments.

On the surface, the data looks positive, but Britain's low unemployment rate is not boosting productivity. Many workers are in part-time work or on "zero-hour contracts" offering no minimum guarantee of hours, say analysts.

"Employment has been rising appreciably but growth has been lackluster -- so output per-hour worked has actually been falling," Howard Archer, chief economic adviser to forecasters EY ITEM Club, told AFP on Tuesday.

"There may be an element of some companies taking on workers recently out of concern that with the labor market pretty tight and Brexit occurring, they may be unable to get the quality of workers they need in the future."

Archer added that "while earnings growth has been rising over the past year, it still remains much cheaper and less risky in a highly uncertain environment to take on labor rather than invest.

"It is also much easier to reverse the taking-on of extra workers than pulling the plug on an investment project if the situation deteriorates," he added.

- Where is the UK economy overall? -

Analysis of the health of Britain's economy can change quickly. Last week, experts reckoned on the country heading for recession this year even before Brexit, amid a global slowdown.

However the outlook has changed for some after official data Monday showed that UK economic growth grew by a better-than-expected 0.3 percent in July. Market experts still expect a severe downturn in the event of a chaotic EU departure.

- What about the weak pound's impact? -

The pound, seen as a better indicator of the UK's economic health than the London stock market, which is loaded with multinationals, continues to suffer Brexit-fueled volatility.

Sterling last week slid below $1.20 for the first time in nearly three years -- reaching the lowest level since 1985 except for a 2016 "flash crash."

One of the biggest consequences of a weak pound has been to push up import costs, which in turn contributed to higher UK inflation.

But while the Bank of England would ordinarily look to hike interest rates to put a lid on rising inflation, Brexit uncertainty has caused it to sit tight.

Supermarkets have meanwhile sought to avoid passing on their higher costs to consumers owing to strong price-competition across the sector.

But small businesses are finding it harder to shield themselves, while Britons heading abroad are facing costlier holidays.

While Britain may avoid falling into recession should it reach an exit deal with the European Union, experts predict a dramatic slowdown in the event of a no-deal.

The Bank of England's latest assessment is for a slide in British GDP of 5.5 percent following a no-deal Brexit.

Unemployment would meanwhile surge to 7.0 percent and the annual inflation rate soar to 5.25 percent from a current 2.1 percent.