Palestinian Refugees in Lebanon Again Rally for Asylum in Canada 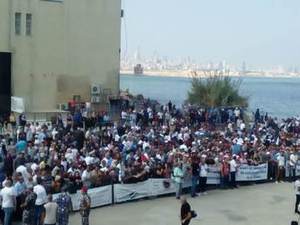 The protesters waved flags of Canada and the European Country asking to be granted asylum.

Last week, many Palestinians also gathered outside the Canadian Embassy in Beirut. They lamented the deteriorating economic and living conditions in Lebanon, which is going through a severe economic crisis, and said they wanted a more dignified life.

There are tens of thousands of Palestinian refugees and their descendants in Lebanon. Most of them live in squalid camps with no access to public services, limited employment opportunities and no rights to ownership.

The periodic protests outside the embassy on the coastal highway north of Beirut began a few weeks ago, after a crackdown on undocumented foreign labor by Lebanese authorities, triggering protests inside some of the 12 camps spread across the country and in Beirut.

The protesters also decried what they say is widespread corruption at the United Nations agency for Palestinian refugees, or UNRWA.

The U.N. Relief and Works Agency, known as UNRWA, is dealing with a budget crunch after an unprecedented loss of all funding from the United States, its largest donor.

Pitty the nation that takes them on....

In fact its easy. If u have money, lebanon is great. If u dont, get the hell out, make some money and come spend it here.

"Cabinet to Meet Thursday to Discuss Appointments"
So presumably the only appointment needed is 'Who turns out the lights at the airport?"

lebanon_first, I don't know a single Lebanese abroad who wishes to return to their country of birth, not the elder and certainly not the younger generations. The Khomeynisation of Lebanon is certainly not appealing to people who lived and evolved in developed countries. The water/hydric stress the region is about to familiarise itself with isn't going to help... not to mention the cancer rate which is the highest in the Mediterranean and Middle East combined due to the pollution. Do I need to mention the banking sector who lifted the secrecy? All expats have been betrayed and back stabbed into paying taxes abroad on top of the Lebanese ones. Not appealing at all!

btw cutie, my iraqian refugee friends jannah and firdous are joining me next month.

cutie;
There is no hope for our tiny Mediterranean country. The bees have immigrated, the Rhinos are bored, and the Cobras are fed-up. Pack your bags and leave.

The houthian labalaba from Houthia deleted my rare comments twice!