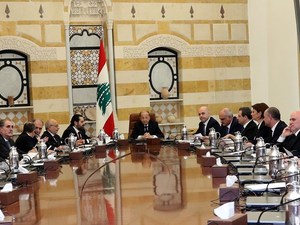 The Cabinet will convene in an ordinary session on Thursday at the Presidential Palace to discuss 29 items on the agenda mainly the controversial appointments in the judiciary.

The meeting will be chaired by President Michel Aoun and in the presence of Prime Minister Saad Hariri.

Appointments in state positions has been a controversial issue mainly between the Lebanese Forces and its Christian rival, the Free Patriotic Movement.

The Cabinet had appointed members of the Constitutional Council without taking into consideration the names suggested by the LF.

The move triggered dismay, prompting the LF to submit a draft law that aims to regulate a mechanism for appointments to first-category and high ranking state positions away from “sectarian” considerations.

The way forward for Lebanon is to abolish the judiciary, except the STL, and create dozens of new cabinet posts, so that each member of the cabinet can have two or three cabinet positions, with all the rewards thereto.
This would not only improve cashflow, it would provide additional diplomatic cover for inactivity, since ministers could claim to be unfamiliar with all the responsibilities of their new positions.
It might be wise to coordinate this development with the funders of Lebanon's stability system, to make sure that some funders do not own too large a share of any one minister.