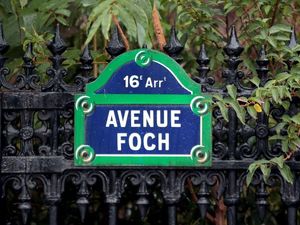 A French court will rule Thursday whether a sister of the Saudi crown prince had a hand in the alleged beating of a workman who carried out repairs in her luxury Paris apartment.

The 42-year-old princess is accused of instructing her bodyguard Rani Saidi to beat up Ashraf Eid, a plumber, after he was seen taking pictures inside her home in September 2016.

Prosecutors have called for the princess, who was tried in absentia in July, to be given a six-month suspended sentence for complicity in an act of intentional violence, complicity in illegal confinement and complicity in theft.

Saidi is charged with intentional violence, theft and illegal confinement.

Prosecutors have recommended an eight-month suspended sentence for Saidi, and a fine of 5,000 euros ($5,500) each for him and the princess.

Eid was working on the seventh floor of the luxury apartment block owned by the Saudi royals on Avenue Foch, a favourite destination of foreign millionaires in Paris, when he was called to the fifth floor to repair a damaged wash basin.

He took pictures of the bathroom which he told investigators he needed to carry out his work.

Eid claims that the princess flew into a rage after he caught her reflection in a mirror on camera. She called in her bodyguard, who allegedly beat him.

Eid claimed he was also tied up and ordered to kiss the feet of the princess, who is lionised in the Saudi state-run media for her charity work and women's rights campaigning.

The plumber claimed he was allowed to leave the apartment only after several hours, during which his phone was destroyed, and that at one point the princess shouted: "Kill him, the dog, he doesn't deserve to live."

A warrant for the princess's arrest was issued in France in December 2017.

Appearing in court in July, Saidi denied hitting Eid, despite marks on the complainant's wrists and bruises on his face for which he was granted a five-day work stoppage.

The bodyguard, who accompanies the princess on her travels in Europe and the United States, was the only one of the three protagonists present for the trial.

"When I heard the princess cry for help, I came and saw them gripping the phone," he told the court, referring to the princess and the workman.

"I grabbed him and overpowered him: I did not know his intentions," he said of Eid, adding that during his 20 years of service for the royal family he had come across other "stories like that".

"The Arabs want photos and the princess is someone who is very important for them," he said, suggesting that the plumber wanted to sell his photographs.

The defence lawyers have questioned Eid's credibility, arguing that he could not have been so traumatised if he came back to the residence after a few days with a bill for 21,000 euros.

Prince Mohammed sparked hopes of major social and economic reform when he was elevated to crown prince in 2017.

But his reputation was badly damaged by the murder of dissident writer Jamal Khashoggi at Saudi Arabia's consulate in Istanbul last year, and he is also seen as the driving force in the Saudi military intervention in Yemen, where tens of thousands have died.

Agnes Callamard, a UN special rapporteur on extrajudicial executions, reported "credible evidence" last month that linked the prince to the killing of Khashoggi, who was strangled and dismembered inside the consulate.