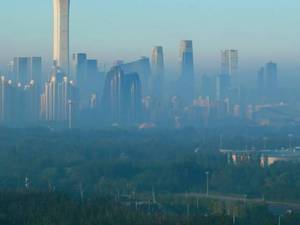 Beijing's notoriously bad air quality has improved in recent years and the Chinese capital is expected to drop out of a list of 200 most polluted cities in the world this year, a data provider said Thursday.

The average hourly PM2.5 readings in the smog-choked Chinese capital fell to 42.6 micrograms per cubic metre of air in the first eight months of 2019, down from 52.8 for the same period last year.

"Compared to a decade earlier, the difference is even more striking," the report said. "The PM2.5 concentration in the first eight months of 2019 was less than half that of the same period in 2009."

But the current levels are still four times higher than those recommended by the World Health Organization.

The tiny particulate matter can lodge deep in the lungs and cause respiratory ailments, lung cancer and cardiovascular diseases.

Beijing was ranked 122 among the most polluted cities in the world in 2018, according to a March report by environmental group Greenpeace and AirVisual's data.

The improvements in air quality were driven by the city's strict push to trim coal consumption and shut down or relocate polluting plants, the Beijing municipal government said in a February statement.