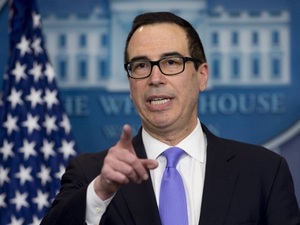 Mnuchin said on CNBC he is "cautiously optimistic" about chances for a deal to resolve the conflict, but Washington and Beijing will first hold talks at the deputy level to ensure senior officials who meet later can advance towards a resolution.

"We don't want a trip that's just a series of discussions. We want to make meaningful progress," he said.

However, he again warned that President Donald Trump will only accept a good deal, and is willing to raise tariffs if necessary.

There have been positive signs this week in trade conflict, now entering its second year, as Trump agreed to Beijing's request to delay one round of tariff increases to October 15 after China agreed to spare some US products from its retaliations.

Senior officials are due to hold preliminary talks later this month, in preparation for meetings in early October led by Mnuchin and U.S. Trade Representative Bob Lighthizer.

Mnuchin said "we clearly didn't make the progress we wanted to" at the last meeting in Shanghai in late July, but he added: "I'm cautiously optimistic. I take the Chinese in good faith that they want to come here with a deal now."