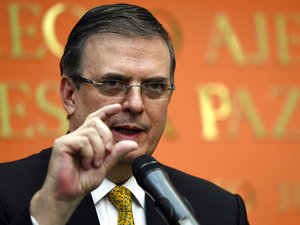 Mexico said Thursday it disagrees with President Donald Trump's decision to restrict the right of Central Americans to seek asylum in the United States, a day after the Supreme Court allowed it to go ahead.

The U.S. high court ruled Wednesday that the Trump administration can declare migrants ineligible for asylum if they enter the country from the southern border without first seeking asylum in one of the countries they crossed to get to there.

The decision, which stayed a lower court's temporary injunction, will be in effect while a broader case against the policy plays out in the courts.

Mexico could see asylum requests soar under the measure, which dramatically changes the rules for the thousands of Central Americans fleeing poverty and gang violence in their home countries in hopes of reaching the United States.

"We have a very different policy in Mexico, and we are not going to change it. Mexico's refugee and asylum policy is a tradition here," Ebrard said.

"What we need to do is create alternatives so that people don't have to take these risks ... (because) of the lack of options" in their home countries.

"It certainly draws one's attention. But it's their decision," he added.

He said Mexican officials would hold a series of meetings Thursday to evaluate the impact for Mexico.

Opponents argue the policy violates international law by forcing people fleeing for their lives to seek refuge in countries where they may also be in danger.

Despite his comments, Ebrard sought to send an upbeat message on U.S.-Mexican relations, saying he had positive meetings in Washington Tuesday with Vice President Mike Pence and Secretary of State Mike Pompeo to review Mexico's progress in implementing a deal to reduce irregular migration.

Under the deal -- signed in June to avoid Trump's threat to impose tariffs on Mexican goods -- U.S. migrant detentions on the southern border have fallen 58.7 percent.

Lopez Obrador, who spoke with Trump by phone Wednesday, said relations were "on very good terms."