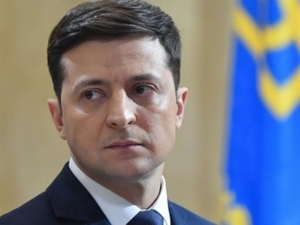 Ukrainian President Volodymyr Zelensky on Friday warned the West against lifting sanctions on Russia as France pushes for rapprochement with Moscow.

Speaking at an annual economic forum in the capital Kiev, the 41-year-old leader claimed that some of Ukraine's Western partners have considered lifting sanctions against Russia.

"Sometimes they think about lifting sanctions. You are losing money. Seriously? I am sorry but we are losing people," Zelensky told the Yalta European Strategy (YES) forum, referring to Russia's annexation of Crimea and the Moscow-backed separatist conflict in eastern Ukraine.

"Essentially, sanctions are a tax needed to maintain world order. A peace tax, if you will. And you know in the civilised world it's normal to pay taxes," he said.

"Sanctions should remain" until peace was restored in eastern Ukraine, Zelensky added.

In 2014, Russia annexed the Crimean peninsula and supported a separatist insurgency in Ukraine's industrial east. The conflict between Russia-backed fighters and Ukrainian troops has killed more than 13,000 people.

In response, the West has imposed sweeping economic sanctions targeting the Russian oil, defence and banking sectors as well as Russian officials over their alleged involvement in the conflict in eastern Ukraine.

On Thursday, the European Union extended by six months sanctions against Russian and Ukrainian officials while it extended economic penalties in June.

French President Emmanuel Macron has in recent weeks pushed for a review of ties with Russia, indicating that more sanctions against Moscow were not in France's interests.

In a keynote speech to French ambassadors in late August, Macron said: "The European continent will never be stable, will never be secure, if we don't pacify and clarify our relations with Russia."