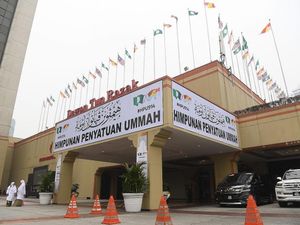 Prime Minister Mahathir Mohamad led an alliance to a historic victory at the polls last year, ousting a corruption-plagued coalition which had been in power over six decades.

The main party in the former ruling coalition, the United Malays National Organisation (UMNO), has since sought to bolster its position by forging closer ties with one-time rival, the Pan-Malaysian Islamic Party (PAS).

On Saturday the parties signed a pact to cooperate in what analysts said is a bid to win backing from the ethnic Malay Muslim majority ahead of the next election, due by 2023.

"UMNO and PAS will ensure that this cooperation will not separate, distance or make enemies of any race or religion in this beloved nation," he was quoted as saying by news portal Malaysiakini.

About 60 percent of Malaysia's population of 32 million are Malay, but the country is also home to substantial ethnic Indian and ethnic Chinese communities who do not usually follow Islam.

But James Chin, a Malaysia expert from the University of Tasmania, said it was a "sad day for those who wish to see a progressive, modern, multi-racial Malaysia.

"UMNO and PAS are telling all Malaysians this country belongs to Malays and Muslims."

He said the pact was a significant threat to Mahathir's coalition, which has a more multi-racial make-up, as UMNO and PAS command strong support in rural areas.