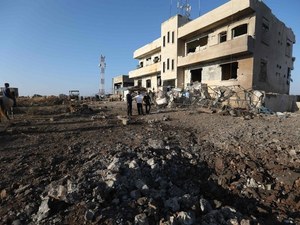 The truce, which brought a halt to four months of devastating bombardment on Idlib province by the government and its ally Russia, had largely held apart from sporadic artillery fire and air strikes.

But on Tuesday, Russia carried out its first air strikes in the area since the ceasefire began, according to the Syrian Observatory for Human Rights.

On Friday, regime rocket fire on the towns of Maaret Al-Numan and Kafranbel in southern Idlib province killed five civilians including a child, the Observatory said.

A sixth civilian was killed in a Russian air strike in the rural west of the province, it added.

That brought to 11 the number killed since the ceasefire came into effect, according to the Britain-based monitor, which has a network of contacts across the war-torn country.

The Hayat Tahrir al-Sham alliance led by Al-Qaeda's former Syria affiliate controls most of Idlib as well as parts of neighbouring Aleppo and Latakia provinces.

The region of around three million people, many of them dispaced by fighting in other areas, is one of the last holdouts of opposition to forces backing Syrian President Bashar al-Assad.

The Observatory on Saturday reported regime fire in various parts of southern Idlib, including close to a Turkish military observation post.

Russian air raids have also targeted hardline jihadists in Idlib's western countryside and nearby parts of Latakia, it said.

The ceasefire is the second since Damascus escalated its operations in the area in April, which have since left at least 980 civilians dead, according to Observatory figures, and which the UN says have forced more than 400,000 people to flee.