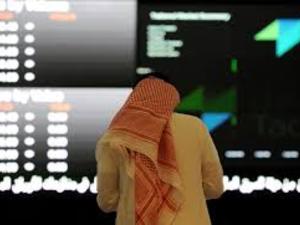 Saudi shares slumped at the start of trading Sunday, the first session after drone attacks on two major oil facilities knocked out more than half the OPEC kingpin's production.

The Tadawul All-Shares Index, which tracks the Arab world's largest capital market, sank three percent, shedding some 200 points in the first few minutes before regaining some of the losses.

The key energy sector plunged 4.7 percent, while the telecom and banking sectors each slid three percent.

The market was also affected by an announcement from the Saudi Basic Industries Co. (SABIC), one of the world's largest petrochemicals producers, that the industry faced a shortage of raw materials.

It did not name the reason but said the issue arose on Saturday -- the day of the drone attack.

Explosives-laden drones struck the processing plants at Abqaiq and Khurais in the Eastern Province early on Saturday morning, knocking out some 5.7 million barrels per day of crude oil production and around two billion cubic feet of natural gas output.

The Abqaiq plant handles some seven million bpd of crude oil and billions of cubic feet of natural gas.

State-owned energy giant Aramco in March acquired 70 percent of SABIC, the largest capitalized firm on the Saudi market, for $69.1 billion.

The major war in the Middle East expected for 2020 is en route.

This being said, what the Houthians did is unacceptable, bombing such plants and creating major pollution on top of global warming is not okay, there should be a swift response to put an end to such unacceptable behavior.

It is not okay to burn the black saudi oil blood, but to bomb Yemen to the stone age is okay.
You reap what you sow, and the Saudis most valuable resource is their oil.

How can the Saudis respond? They can drop a few more missiles and napalm on the same desolate mountains, or the same destroyed buildings.

Yemen is destroyed, the Ansarullah got nothing left to lose. They can not seek refuge like the Syrians did, the Ansarullah only have war on their mind, and they live for war whilst the weak Saudis live for the Aramco Oil.

I couldn't care less about them killing one another, but no one can pollute the atmosphere in such a barbarian fashion.
finally, this will also impact fuel prices for all Lebanese in the upcoming days, not a very clever way for gaining our sympathy for their lost cause.