Hariri Expresses Lebanon Solidarity with KSA after Attack on Aramco 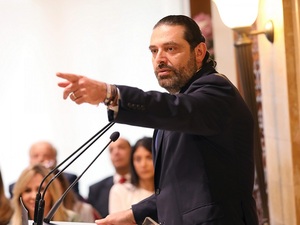 In a statement, Hariri said the development is a “dangerous escalation that threatens to expand the zone of conflicts in the region.”

“This aggression puts great responsibilities on the shoulders of the international community in terms of deterring all the tools of aggression and terrorism that are invading the Arab countries and subjecting regional stability to further entanglement in roving conflicts,” the premier added.

“We in Lebanon stress our solidarity with the Kingdom of Saudi Arabia and consider the aggression against it a chapter of a wave that is targeting the Arab Gulf and regional and international security,” Hariri went on to say, urging all Arabs to “show solidarity in order to foil the threats that are surrounding our countries.”

The disruption represents half the output of the kingdom, which is the world's biggest oil supplier.

Yemen's Iran-aligned Huthi rebels have claimed responsibility for the attack but U.S. Secretary of State Mike Pompeo blamed Tehran, saying there was no evidence it was launched from Yemen.

Hariri Expresses Lebanon Solidarity with KSA after Attack on Aramco

lol does that include the shia iranian terror group and its followers?

Having reached such a level of hypocrisy, I suspect it dies include the Shia Iranian terrorists and associates.