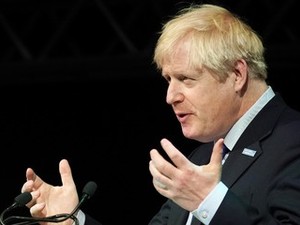 Six weeks after he took office and six weeks before he is due to lead Britain out of the European Union, Prime Minister Boris Johnson is to meet Jean-Claude Junker.

On Monday, after comparing himself to berserk comic book super-smasher Hulk, the British leader will enjoy a genteel working lunch with the EU Commission president.

Downing Street has confidently billed the Luxembourg visit as part of efforts to negotiate an orderly divorce from the union before an October 17 EU summit.

But Brussels has played down talk of a breakthrough, insisting Johnson has yet to suggest any "legally operable" proposal to revise a previous withdrawal accord.

Chief EU negotiator Michel Barnier, who will join the leaders for their talks in Juncker's native Grand Duchy, has said he has "no reason to be optimistic".

And the European Parliament will this week vote on a resolution rejecting Johnson's demand that the so-called "Irish backstop" clause be stripped from the deal.

Johnson insists this measure, which temporarily keeps the UK in the EU customs union, has to go if he is to bring the agreement back to the House of Commons.

But the accord will also have to win the support of the other 27 EU leaders and the European Parliament if Britain is not to crash out with no deal on October 31.

Johnson, in turn, boasts that he would rather be "dead in a ditch" than ask his European counterparts to postpone Brexit for a third time into next year.

"Be in no doubt that if we cannot get a deal -- the right deal for both sides -- then the UK will come out anyway," Johnson said, writing in the Daily Telegraph on Monday.

It is difficult, then, to see what might come from the lunch, which will be held behind closed doors with no plan for a joint statement afterwards.

Nevertheless, Johnson told the Mail on Sunday he remains "very confident" of getting a new deal before the October 17 summit.

"A huge amount of progress is being made," he said, referring to "technical talks" on border procedures between his Brexit adviser David Frost and Barnier's team.

Speaking to the BBC Sunday, Brexit Secretary Stephen Barclay indicated that any post-Brexit transition period could be extended past 2020 in order to resolve issues with the border.

Johnson compared himself to Marvel comics hero Hulk, the rampaging mutant alter-ego of a mild-mannered nuclear scientist whose catchphrase is "Hulk smash!"

"The madder Hulk gets, the stronger Hulk gets and he always escaped, no matter how tightly bound in he seemed to be," Johnson told the paper.

Johnson's strategy faces opposition at home, where rebel and opposition MPs have passed a law aimed at forcing him to seek a Brexit delay.

Britain's Supreme Court will rule this week on a bid to overturn Johnson's decision to suspend parliament and limit time to debate the crisis.

Barnier will address the European Parliament session in Strasbourg on Wednesday as MEPs vote to reaffirm and reinforce the EU Brexit stance.

Barnier previously briefed the leaders of political groups in the assembly on Thursday last week, and he had a downbeat message.

"I can't objectively tell you whether the contacts we have undertaken with Mr. Johnson's government will lead to an agreement between now and mid-October," he said.

After that meeting, the speaker of the parliament David Sassoli unveiled the Brexit resolution, which would insist that the Irish backstop remain in the deal.

"The resolution says that if there is a no-deal departure, then that is entirely the responsibility of the United Kingdom," he said.

After his lunch with Juncker, Johnson is due to meet Luxembourg's Prime Minister Xavier Bettel. The pair will hold a joint news conference.