Report: More Lebanese Banks Could Be Hit by U.S. Sanctions 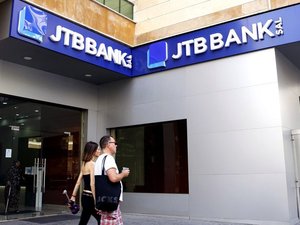 Three Lebanese financial institutions could be subject to US sanctions, shortly after a batch of sanctions hit Jammal Trust Bank for “facilitating banking activities for Hizbullah, and its three subsidiaries,” al-Joumhouria daily reported on Monday.

The daily quoted “reliable” sources as saying that the decision “has been taken to put three Lebanese banks on the sanctions list.”

However, they did not specify when the decision will be issued.

In August, the Treasury's Office of Foreign Assets Control sanctioned Jammal Trust Bank for "knowingly facilitating banking activities" for Hizbullah, “Iran's proxy in Lebanon,” as part of a maximum pressure campaign against Tehran.

The bank and Hizbullah have been doing business since at least the mid-2000s, Treasury said.

The U.S. has been imposing sanctions on officials from Hizbullah, which Washington considers a terrorist organization.

If these 3 unnamed banks launder money for terrorists, then they deserve deserve to be on the sanctions lists.