Iran Says 'No Plans' for Rouhani-Trump Meet on UN Sidelines 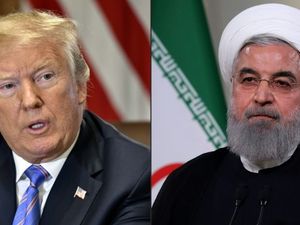 Iran said Monday there were no plans for President Hassan Rouhani to meet his US counterpart Donald Trump at an upcoming UN gathering, as tensions mount between the arch-foes over attacks on Saudi oil sites.

European powers have been trying to de-escalate the tensions that have spiralled since Trump unilaterally withdrew the United States from a 2015 nuclear deal and reimposed crippling sanctions on Iran.

The White House said on Sunday that Trump could meet Rouhani on the sidelines of the United Nations General Assembly in New York next week.

That was despite accusations from Washington that Tehran was to blame for the weekend attacks that knocked out half of Saudi Arabia's oil production and sent crude prices surging on global markets.

"We have neither planned for this meeting, nor do I think such a thing would happen in New York," Iran's foreign ministry spokesman Abbas Mousavi said, quoted by the semi-official ISNA news agency.

"As we have stated before, if the Americans return to the JCPOA and cease their economic terrorism, they can return to the joint commission and talk," Mousavi added.

He was referring to a commission within the framework of the Joint Comprehensive Plan of Action, the 2015 agreement that gave Iran the promise of relief from sanctions in return for curbs on its nuclear programme.

Iran again dismissed accusations from the United States that it was behind the Saudi attacks, saying instead that they resulted from the intervention of a coalition led by US ally Saudi Arabia in Yemen's war.

"Yemen has been under attack for five years, leaving many dead and children homeless," said government spokesman Ali Rabiei.

The Saudi attacks were "the result of this five-year war against defenceless people which is the root of the region's insecurity", he told a news conference in Tehran.

The Saudi-led coalition intervened in Yemen in March 2015 after Huthi rebels drove the government out of the capital Sanaa and seized swathes of other territory.

The Iran-aligned Huthis claimed responsibility for the weekend strikes on the oil facilities at Abqaiq and Khurais in Saudi Arabia's Eastern Province.

Trump said on Sunday that the US was "locked and loaded" to respond after US Secretary of State Mike Pompeo condemned Iran for the attacks and said it would be "held accountable".

Iran on Monday dismissed the accusations, saying they were "part of America's psychological warfare".

"This is a type of American tradition in shifting the blame," said government spokesman Rabiei.

The attacks on the Saudi oil facilities were "the natural reaction to suppressing the people of a country... and those who would get hurt are in the region", he said.

"What benefit could we possibly get?"

Since pulling out of the nuclear deal, the US has slapped waves of sanctions on Iran that have targeted its armed forces, financial sector and senior officials, including Foreign Minister Mohammad Javad Zarif.

That has raised questions as to whether or not Iran's top diplomat will attend the UN gathering in New York at which the general debate opens on September 24.

His ministry's spokesman Mousavi said on Monday that Zarif would travel to New York for the gathering together with Rouhani "if the conditions are right".