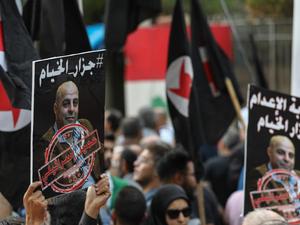 A crowd of citizens gathered in front of Beirut’s Justice Palace in protest against allowing senior member of a disbanded Israel-backed militia, Amer al-Fakhoury, enter Lebanon demanding severe sentence against him, the National News Agency reported on Monday.

The protesters demanded strict punishment for al-Fakhoury, a former member of the pro-Israel South Lebanon Army (SLA) militia and a senior warden in the notorious SLA-run Khiyam prison. His return revived accusations of torture.

A committee representing the liberated prisoners from Israeli occupation jails had earlier filed a lawsuit against Fakhoury.

The country's General Security agency has been interrogating Fakhoury since Wednesday.

Another security source said the former SLA member had fled to the United States and had already been charged in absentia to 15 years in prison for collaborating with Israel.

Opened in 1984 in an Israeli-occupied part of southern Lebanon, the Khiyam prison was run by the Christian-dominated SLA.

Former inmates accuse Fakhoury of ordering the torture of thousands of detainees held there before Israeli forces withdrew from the area in 2000, ending their 22-year occupation of south Lebanon.