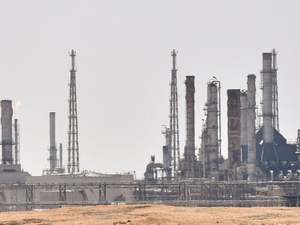 Oil prices dipped Tuesday but held most of the previous day's record gains following an attack on Saudi facilities that wiped out half the country's output, with traders nervously awaiting the US response after it said Iran was likely to blame.

The crisis revived fears of a conflict in the tinderbox Gulf region and raised questions about the security of crude fields in the world's top exporter as well as other producers.

It has also taken attention away from the upcoming trade talks between China and the US as well as a much-anticipated policy meeting of the Federal Reserve, which is expected to see it cut interest rates.

Trump said he was ready to help Riyadh following the strikes but would await a "definitive" determination on who was responsible.

Iran-backed Huthi rebels in Yemen have claimed responsibility but Washington and Riyadh have pointed the finger at Tehran, which denies the accusations.

Trump appeared to temper his earlier warning that the US was "locked and loaded" to response, saying: "I'm not looking to get into a new conflict, but sometimes you have to."

The weekend's attack sent both main oil prices surging almost 15 percent on Monday and managed to hold most of those in early Asian trade with WTI and Brent dipping a little more than one percent.

Uncertainty and geopolitical fears hit regional equities, which had been enjoying an upbeat month thanks to easing trade war tensions and fresh easing measures by global central banks.

Hong Kong fell 0.9 percent with sometimes violent unrest adding to the financial hub's woes and dragging on the economy.

Taipei and Manila were also lower, though Seoul, Wellington and Jakarta rose slightly.

But while there are fears of a conflagration in the Middle East, observers said the chances of that were low.

"Despite the circumstantial evidence, I feel the barrier of proof would have to be very high indeed. Almost impossibly so as there are zero appetites in the world for a military conflict with Iran," said Jeffrey Halley, senior market analyst for the Asia-Pacific at OANDA.

He said the most likely outcome would be more severe sanctions on Iran, though he pointed out: "What is clear is that Saudi Arabian oil infrastructure is more vulnerable than thought, and a risk premium will be built into oil prices going forward."

Analysts said the Fed would probably consider the Saudi attack's possible impact on the economy and prices when deciding on its next monetary policy move this week but tipped it to cut borrowing costs after its meeting Wednesday.

Also providing some optimism was news that Chinese vice finance minister Liao Min will visit the United States on Wednesday to "pave the way" for the higher level talks planned for next month.

On foreign exchanges the aversion to riskier assets pushed the dollar up against high-yielding currencies, while the pound fought to recover from Monday's losses.