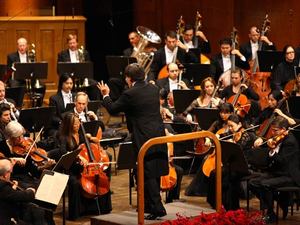 It's the dreaded sound at any live performance — a ringing mobile phone.

That's what happened Tuesday night at Lincoln Center's Avery Fisher Hall during the final movement of Gustav Mahler's Ninth Symphony by the New York Philharmonic. Maestro Alan Gilbert stopped the orchestra until the phone was silenced.

The Wall Street Journal (http://on.wsj.com/xvTkcr) reports that when an iPhone's distinctive "Marimba" ringtone initially went off, Gilbert turned his head to signal his displeasure. But the ringing from the first row persisted and minutes went by.

Gilbert asked that the offending noise be turned off and finally stopped the orchestra until it was.

The Philharmonic said it was the first time the music director had ever interrupted a performance due to a mobile phone or other disruption.