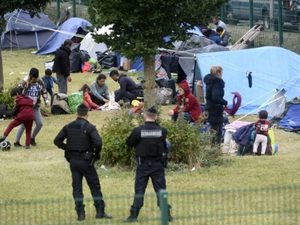 French police began clearing around 1,000 migrants from a gymnasium near the northern port of Dunkirk on Tuesday after a court ruled it was a health and security hazard.

The mayor of Grande-Synthe in December 2018 opened up the sports hall to migrant families seeking shelter from the cold.

Since then, it has grown into a makeshift camp with around 800 people sleeping in tents pitched around the crammed gymnasium where some 170 people, mostly Iraqi Kurds hoping to reach Britain, had been sheltering.

Young men travelling alone were the first to board buses that will take them to shelters around the region, where they can apply for asylum.

Families were to be moved later.

Northern France has long been a magnet for people seeking to smuggle themselves to Britain in the tens of thousands of trucks and cars that travel daily between the countries on ferries and trains.

The area around Grande-Synthe has traditionally drawn Iraqi Kurds and has been repeatedly cleared in recent years.

A court in the regional city of Lille ordered the gymnasium shut on September 4 following complaints from local authorities and residents about violence, garbage and the presence of people-smugglers among the migrants.

French authorities have had a policy of trying to prevent migrants forming camps since 2016 when they razed a notorious illegal squat nicknamed the "Jungle" near the port of Calais which was home to 10,000 people at its height.

But rights groups have criticised police tactics and migrants have begun taking every greater risks to try reach Britain, including trying to cross the Channel -- the world's busiest shipping lane -- in small boats.

In December, the country's human rights ombudsman denounced the "extreme destitution" suffered by people camping out or sleeping under bridges in the Calais area.

The ombudsman, Jacques Toubon, accused the authorities of "trying to make (migrants) invisible" by regularly tearing down their camps without providing them with viable alternatives.

French President Emmanuel Macron has pledged to speed up the asylum claims process for people deemed to be bona fide refugees, while vowing to accelerate the deportation of so-called economic migrants.

On Monday, he told his ministers that the government needed to tackle the issue of immigration headlong, warning that "by claiming to be humanist, sometimes we are too laxist."