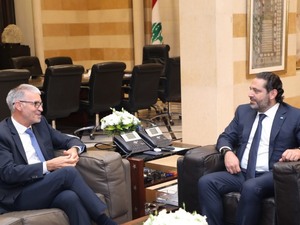 The visit has tackled several issues including the PM’s visit to France to help implement CEDRE decisions.

After the meeting, Bernasconi said: “It is with great pleasure that I met with the Prime Minister, in an important visit dedicated to the signing of an agreement between the Lebanese CES at the invitation of Charles Arbid and the French CESE. We spoke about civil society, the role it can play within the institutions and what positive contribution it can make.

“We also mentioned a number of more economic topics like the place of French companies here in Lebanon. We also talked about his trip next Friday, September 20, to France, during which he will meet with the French President and some large French companies. These meetings are important because they will allow to start a project on which we base much hope, the CEDRE project. France is very attached to this project as a tool to revitalize the economy and bring some positive solutions to the difficulties encountered. These are positive signs and I hope they will be considered as such by all stakeholders”.

Hariri then received Italian Ambassador to Lebanon Massimo Marotti who said after the meeting: “I met with the PM and we discussed the bilateral relations, focusing on the follow up of Rome Conference and the preparation of the CEDRE conference follow up mechanism. We are working on financial facilities for joint ventures between Lebanese and Italian companies that will be finalized soon.”