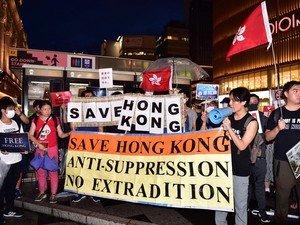 As pro-democracy protests grind on for a fourth month, Hong Kong has been left counting the cost, with the city’s tourist industry battered and businesses forced to lay off staff as they struggle to stay afloat.

Images beamed around the world of black-clad demonstrators battling police in full riot gear on streets usually lined with shoppers have led travellers to shun the financial hub.

And with protesters and the government showing no signs of backing down, there are worries things will not improve any time soon.

August witnessed the biggest fall in overseas visitors since the SARS epidemic of 2003 claimed nearly 300 lives and unleashed widespread panic in the city, according to government data.

Among the worst-hit areas is Causeway Bay, a normally bustling commercial precinct home to a slate of luxury brands where last weekend shoppers and bystanders were caught up as police fired volleys of tear gas at masked youths.

A neighbourhood pharmacist, who asked to be identified only by his surname Chiu, told AFP the overseas customers who accounted for half his sales had slowed to a trickle since the protests began in June.

"The social atmosphere is not good," he said, adding that he has repeatedly had to shut his shop as tear gas canisters bounce down the street. Takings, he says, have tumbled 40-50 percent.

He said his business was faring worse than during 2014's Umbrella Movement, which saw the city grind to a standstill after a months-long blockade of busy roads.

Across Hong Kong, on-year tourist arrivals fell 40 percent in the last month, the city’s financial secretary Paul Chan said, led by a collapse in visitors from the mainland -- by far the largest group.

Hotel occupancy rates are down around half and the retail and dining sectors have been severely impacted.

"It is worrying that so far there is no sign of improvement in the near future," Chan wrote in a blog post.

Adding to the problems for Hong Kong, the long-running crisis has coincided with weak global demand and the grinding China-US trade war.

Seasonally adjusted, the economy contracted by 0.4 percent in the second quarter -- most of which came before the pro-democracy rallies began -- while Chan also reported a 5.7-percent yearly fall in overall exports in the first half.

No one is looking forward to third-quarter statistics.

Crucially, the number of visitors from mainland China has tumbled after several full-throated condemnations of demonstrators by Beijing, which has likened the unrest to "terrorism".

Hong Kong’s flagship airline Cathay Pacific also reported an 11-percent yearly drop in passengers for August, when two occupations of the airport saw the blockade of departure gates and the cancellation of hundreds of flights.

Several other businesses told AFP their bottom lines had suffered through the long summer of discontent, sparked by a controversial extradition bill many fear would strengthen Beijing’s control over the city and further erode its cherished freedoms.

Since June, when more than a million people marched through the city to protest the measure, the manager of a watch store said he had been forced to lay off half of its workforce.

"You can see if you walk down the streets, several watch shops have been closed already," said the store's manager, surnamed Wong. "I’m pessimistic. I don’t know if we can survive through the new year."

The protests tend to break out over the weekends -- the two days his shop is usually at its busiest.

On the other side of the harbour in Mongkok, businesses said they were regularly shutting their doors early to avoid melees outside.

The area around the neon-soaked retail precinct has seen escalating violence, with demonstrators barricading main roads and vandalising the local subway station -- and officers responding with baton charges.

At one late-night outdoor market stall, a vendor selling imitation designer handbags said her takings were down five-fold from average sales at the start of the year.

With no end in sight, Chiu, the pharmacist, seemed to be torn between his sympathies for the protesters and protecting his livelihood.

"I don't support them damaging facilities, but I feel awful seeing them being beaten by police," he told AFP.

He said he and his staff had left supplies of water outside his shop for protesters during street rallies, knowing other stores had closed.

"I support the youngsters," he said. "But I also have a business to run."