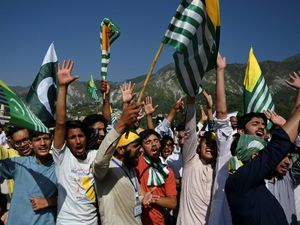 Pakistan fired back Wednesday at New Delhi's "jingoistic rhetoric" after India's foreign minister vowed to retake Islamabad's portion of the disputed Kashmir region as tensions flare between the nuclear-armed rivals.

The neighbours have been locked in an escalating war of words since New Delhi stripped Indian-administered Kashmir of its autonomy last month and imposed a security lockdown on the area, sparking outrage in Pakistan.

Kashmir, split between the two countries since 1947, has been the spark for two major wars and countless clashes between them.

"We strongly condemn and reject the inflammatory and irresponsible remarks made by the Indian external affairs minister," Pakistan's foreign ministry said in a statement.

"Such irresponsible and belligerent statements have the potential to further escalate tensions and seriously jeopardise peace and security in the region," it added.

The statement came hours after Subrahmanyam Jaishankar told a press conference Tuesday that Pakistani-controlled Kashmir is "part of India and we expect one day that we will have the... physical jurisdiction over it".

Tensions have spiralled since New Delhi's move on its side of the de facto border -- the Line of Control -- to change the status of the Himalayan territory, with Pakistan repeatedly likening Indian Prime Minister Narendra Modi to Hitler and calling for international intervention.

Pakistani Prime Minister Imran Khan has held demonstrations across the country to protest the move and vowed to highlight the issue later this month at the UN General Assembly in New York.