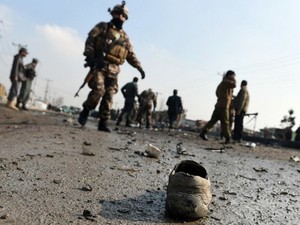 A suicide bomber has detonated inside a government building in eastern Afghanistan, a provincial official said Wednesday, with casualties feared in the latest violence to hit the war-torn country.

"Security forces are in the area to rescue the staff" at the electronic identification registration centre in Jalalabad, capital of Nangarhar province, said provincial spokesman Ataullah Khogyani.

A suicide bomber should detonate himself inside blablablablabla's deep and wide luv tunnel as it is being penetrated on a daily basis by virile young men who deposit their lubricants inside it on a regular basis.