British Ambassador Writes about His 'Optimism' on Lebanon 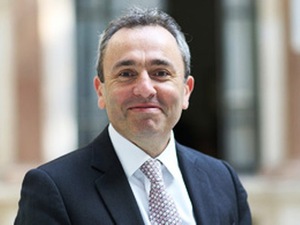 After one year in Lebanon British Ambassador Chris Rampling has written a blog entitled: '12 months in Lebanon: 'It can sometimes be hard to stay optimistic...but here's why I do', the UK embassy said.

2 months in Lebanon: ‘It can sometimes be hard to stay optimistic … but here’s why I do’

This time last year was one of the highlights of my career – presenting Queen Elizabeth’s letter to President Aoun that nominated me as Ambassador. The anniversary has allowed reflection on the year: for Lebanon, and for the UK.

My first 12 months in Lebanon has been remarkable. Rolls Royce and MEA signed our largest ever bilateral trade deal. I met the 10,000th Lebanese soldier trained by the UK, and one of the UK’s most modern naval frigates came to Beirut. We hosted the first official visit by a British Royal, and partnered with the National Library for a stunning celebration of the UK in Lebanon. I have seen the results of our sustained work with women in Parliament, on community policing in Beirut, and in the education sector. And I have been lucky enough to visit every Governorate, meeting incredible people, with remarkable and inspiring stories. After we changed our Travel Advice, I became the first British Ambassador in 10 years to attend the Baalbek Festival.

But supporting Lebanon has not been a walk along the corniche. Efforts to stabilise the economy have been the main theme. The UK supports the Government’s programme and CEDRE: economic reform will be painful, but it is not optional and it is urgent. Debt must come down, the books be better balanced, and domestic and international confidence rekindled. Only then can Lebanon fulfil its enormous potential. There are plenty of opportunities for more Trade and Investment, and we have a new UK Trade Envoy. But this will not come just because we wish it. If things do not change, the economy will not recover.

The effects of the Syrian crisis have also been a theme. I have opened UK-funded community centres in the Bekaa, the fishing port in Jiyeh, and seen a new apple factory in Jezzine. Listened to Syrian children in schools, and adults in communities. We will continue to support Lebanon, and to look for new areas in which we can work together. Standing with both host communities and the refugees themselves.

he last thing Lebanon needs is more insecurity, and the isolated attack in Tripoli on LAF and ISF officers was deeply saddening. Your security services – of whom we remain proud partners - do critical work, in difficult environments.

But other security concerns are also serious. Just after I arrived, there were the tunnels to Israel, and in recent weeks the tension between Hizballah and Israel. The region is uncertain. Furthermore, the UK recognised in February that it was no longer tenable to distinguish between the military and political wings of Hizballah and proscribed the latter. We continue to call for calm and full respect by all for UN Security Council Resolution 1701 and the Baabda Declaration. I believe passionately that Lebanon’s security and that of its people can and will only be served by respect by all of these commitments.

And obviously, I cannot reflect on the last 12 months without thinking about the UK. We have this year seen a change in Prime Minister and a number of changes in the legal date for our departure from the European Union. Brexit dominates the headlines about my country, and the perceptions of some.

But I know this is not the overwhelming feeling of most Lebanese. Many recall our world-leading Education (4 of the top 15 universities in the world). Or our strong economy, with record low unemployment and high skills base. Our cutting-edge financial, legal, arbitration, and technology services (with a perfectly-timed Forum in London this week. Some of the most exhilarating, diverse, cities in the world. A stunning culture and sport offering. And so on. It is easy to stay positive about the UK’s future.

As it is with Lebanon. I have lived in 6 countries outside the UK, and the Lebanese are the most creative, entrepreneurial and agile. You look all around the compass, and have what you need for success. Times are tougher now, but education, languages, technology, and openness to the world are the keys to the future. Lebanon has all. And, as I felt when we said goodbye last week to the latest group of UK Government Chevening scholars, through much of your history, your people have led the way.

Building a successful future is at the heart of the UK/Lebanon Year of Education that is almost upon us. Through that, our economic, security and service programmes, my team and I plan to spend more time around the country in the coming year, whether in Nabatieh, Saida, Tripoli, Baalbek, Zahle, Byblos, the Chouf or elsewhere. Everywhere we go, we will see how the UK can invest today, for a better tomorrow.

So, despite the current challenges this wonderful country faces, I remain positive. I hope you can too.

Yeah, Lebanon is a nice place to live in if you are an Ambassador.

he was high on ceylon tea...

Chris is just rampling about Lebanon cause he loves our Narghila and Hummus.... another British PR Ambo....keep the natives happy and the British end up what!

It's because he was born a rampling man, he's got rampling on his mind and he'll rample on.