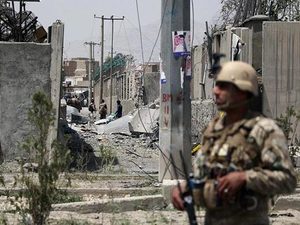 War-weary Afghanistan was hit with its third straight day of bloody carnage Thursday, as a Taliban car bomb flattened a hospital and killed 20 people in the south, while nine others died in a drone strike in the east.

The surge in violence, with civilians paying the heaviest price, has come after US President Donald Trump called off talks with the Taliban that could have seen Washington begin withdrawing troops, and as the country gears up for a presidential election.

The insurgents responded to Trump's declaration that the talks were "dead" earlier this month by promising to continue fighting, and have vowed to target the September 28 polls, Afghanistan's fourth presidential election since the hardline Islamist group was ousted from power in 2001.

Thursday's bloodshed began near dawn, when the Taliban killed at least 20 people and wounded 90 after a car bomb destroyed a hospital in the southern Afghan city of Qalat.

Hours later, reports emerged of an overnight drone strike in eastern Nangarhar province said to have killed at least nine civilians who had been camping in the mountainous region as they collected pine nuts.

The US is the only member of the international coalition in Afghanistan that provides air support in the conflict, but there was no immediate statement from its forces in Afghanistan, the United Nations or NATO.

The strike came just hours after four people were killed on Wednesday when unknown gunmen and a suicide bomber stormed a government building in nearby Jalalabad, capital of Nangarhar province.

On Tuesday, the Taliban killed nearly 50 people in two separate attacks -- one on a campaign rally for President Ashraf Ghani in the central province of Parwan, and the other in Kabul.

Ordinary Afghans continue to bear the brunt of the nearly 18-year conflict, with more civilians killed in the Afghan war in 2018 than during any other year on record, according to the UN.

An increase in air strikes by US and Afghan forces also led to more civilian deaths in 2018, with over 500 killed by aerial operations for the first time on record.

Residents near the blast, which was claimed by the Taliban, said the explosion rattled homes and shattered windows and was followed by gunfire.

"It was horrific," said university student Atif Baloch, who saw women and children being dragged from the scene by rescuers.

Panic also spread among residents searching for family at the hospital.

"I rushed to the scene and I am looking for them and cannot find them... I don't know what to do," shopkeeper Muqim Ahmad told AFP, saying his wife and mother were inside the facility at the time of the blast.

In Nangarhar, district governor Shamsul Haq told AFP that nine people were killed and six wounded in the drone strike in Khogyani district, adding they were all civilians.

Other officials gave varying tolls, with one putting the deaths at as many as 30.

One survivor, 22-year-old Pir Mohammad, told AFP that labourers had come from other provinces to pick pine nuts and were asleep in their tents when the strike began.

"Many of our friends were killed for no reason, and dozens of others were wounded," he told AFP from a hospital in Jalalabad, where he was being treated for shrapnel wounds.

Both the Islamic State group and the Taliban are active in Nangarhar, which borders Pakistan.

The Taliban have vowed to disrupt the September 28 election in which Ghani is taking on his own Chief Executive, Abdullah Abdullah, and more than a dozen other candidates.

The Trump administration has condemned the violence.

"The president has made clear that he will not negotiate a peace agreement while the Taliban continues such attacks," said a White House statement condemning Tuesday's blasts.

But the Taliban argue that the US is also killing people in Afghanistan, and have repeatedly voiced their belief that Washington will eventually return to the table for more negotiations, stating their door is "open".