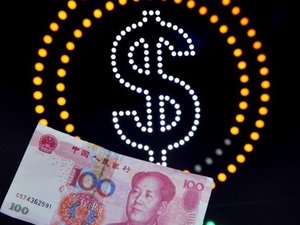 China's forex reserves, the biggest in the world, fell to $3.18 trillion in the last quarter of 2011, the central bank said Friday, the first quarterly fall since 1998 during the Asian financial crisis.

The huge foreign exchange reserves, which reflect the nation's imbalance of international payments, reached a peak of $3.274 trillion in October before beginning a slight decline, the bank said.

At the end of September, China's foreign reserves stood at $3.202 trillion.

"This is the first time for China's forex reserves to drop on quarter since 1998," Nomura economist Zhiwei Zhang told Dow Jones Newswires. "This is a very big thing."

The previous drop came during the Asian financial crisis, when economies around the Asian region were battered by waves of capital flight.

The stockpile has been rising as Beijing buys foreign currencies used to pay for the country's exports in order to control the value of the yuan.

The fall in the reserves reflects capital outflows in the quarter due to expectations of a yuan depreciation and increased investor interest in holding dollars, HSBC economist Ma Xiaoping told Dow Jones.

The fundamentals of China's economy offer support for a future rise in the value of the yuan and "the quarterly fall should be temporary," she said.