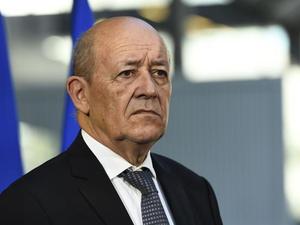 "The Huthis, who are Yemeni rebels, announced that it was they who provoked this attack, which lacks credibility," Le Drian told France's CNews channel.

Tehran-backed Huthi rebels in Saudi Arabia's southern neighbour Yemen have claimed responsibility for the attacks, which knocked out half of Saudi oil production.

But both Washington and Riyadh have ruled that out and pinned the blame on Saudi's arch-foe Iran.

On Wednesday, Saudi Arabia displayed what it said were fragments of 25 drones and cruise missiles, which they said proved the attack was carried out by Tehran.

But Le Drian cast doubt on the ability of the Huthis to carry out an attack of that scale and range from Yemen.

"But given that there is an international investigation let's wait for the results," he said.

US Secretary of State Mike Pompeo on Wednesday denounced the strikes as an "act of war", comments seen as raising the risk of a wider conflict in the Gulf region.

French President Emmanuel Macron has been trying to broker a reduction in the tensions, which have intensified since the US pulled out of a deal on Iran's nuclear programme last year and reimposed crippling sanctions.

On Wednesday, France announced that it was sending experts to Saudi Arabia to help investigate the origin of the oil attacks.

Le Drian linked the timing of the strikes to next week's UN General Assembly in New York, where a meeting between US President Donald Trump and his Iranian counterpart Hassan Rouhani had been mooted.

"We need now to return to the principle of de-escalation," he said.