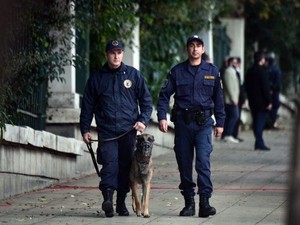 Police in Athens on Thursday removed over 200 migrants, including dozens of children, from two squats in the city centre as part of a clean up drive by the new conservative government.

Some 230 people, including 70 children, were removed and taken to the police headquarters for identification, Athens municipal radio reported.

The police declined to give details.

State TV ERT showed the migrants boarding buses, some of them clutching plastic bags with their belongings.

The crackdown has been opposed by anti-establishment and rights groups who say the operations unfairly target migrant families, who would otherwise be homeless.

Thousands of anti-establishment protesters marched in Athens on Saturday in a demonstration against the squat evacuations.

New Prime Minister Kyriakos Mitsotakis, elected in July, has vowed to combat "lawlessness". The new Athens Mayor Kostas Bakoyannis -- who is the prime minister's nephew -- was similarly elected on a law and order ticket in June.

Bakoyannis argues that order must be restored before sidelined landmarks such as the National Archaeological Museum and the Athens Polytechnic -- in the middle of drug-trading areas -- can become tourist draws.