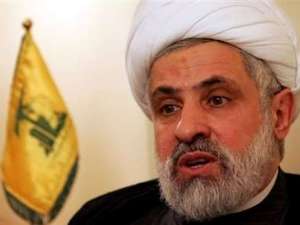 Hizbullah deputy chief Sheikh Naim Qassem accused “internal” parties in Lebanon of “having a role in the US sanctions against Hizbullah,” al-Jooumhouria daily reported on Thursday.

“We have information that internal parties are part of a system promoting Americans and their sanctions, and they report periodically to the Americans and propose specific measures on how to confront Hizbullah in Lebanon,” Qassem said in remarks to the daily.

Assuring that US sanctions “won’t affect” Hizbullah, he said Hizbullah understands the US enmity towards the party, “but we won’t accept sanctions against Lebanese citizens, and institutions, or their intervention in the country, pushing things in certain directions and order the government and central bank to make certain arrangements,” he said.

He said Hizbullah won’t accept “orders from the US President. We are weighing our options now.”

hizbala terrorises the country with its weapons since the year 2000, do they expect no form of resistance? Others lay not have rockets but they've got phones, papers, pencils and stamps to resist!

I thought they just said a week ago that it was unprecedended consuensus among the lebanese regarding Hezbollah. I guess they have woken up from their dreams now.

lol, yeah so much 'Consensus':)

"We are weighing our options now.” So what institution will you be terrorizing now?