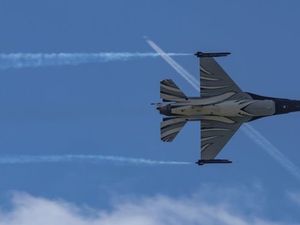 An F-16 jet of the Belgian air force crashed on Thursday in the Morbihan region of western France, with both pilots successfully ejecting but one still hanging by a parachute from a power line, the local  prefecture said in a statement.

"The pilot and the co-pilot were able to eject before the crash. They were both localised and are alive," it said. It added that one pilot had been rescued while operations were underway to free the other from the high-voltage power line.