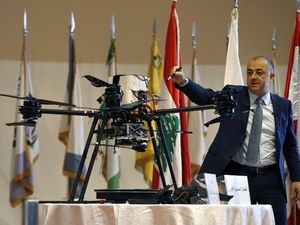 Defense Minister Elias Bou Saab announced in a press conference on Thursday the outcome of investigations into the attack of two Israeli drones on Beirut's southern suburbs late in August .

"The enemy drone violation of Beirut's suburbs is the most serious since the 2006 July war; it proves that Israelis have adopted a change in the rules of engagement with Lebanon," said Bou Saab.

Counting Israel’s violations of UN Resolution 1701, he said: “480 Israeli violations of resolution 1701 were reported within the last two months, the most serious of which has been the explosives-loaded drones that passed over Beirut airport and endangered air traffic, and then headed to the city's southern suburbs.”

He added saying that “Several enemy planes were in the Lebanese airspace to control the path of the two drones,” noting that one the drones was carrying 4.5 plastic explosives.

“The drone, which fell in the suburbs, is a sophisticated military one that aimed to attack the city of Beirut. It was launched from Habonim Airfield in Israel and could be controlled via UAV," Bou Saab added, noting that the aim of the drone was to attack not just tape footage of the area.

He pointed out that Lebanon today was in a “self-defense mode,” deeming this is a legitimate right as per the government's ministerial statement.

Moreover, the Minister denied any links between the issue of Israeli agent Amer al-Fakhouri and the Israeli drone attack.

"According to our information, the military court sentenced Fakhouri back in 1996 on charges of collaborating with the enemy," Bou Saab said, stressing that the Lebanese army will not be lenient with any collaborator "who killed and tortured members of the resistance and prisoners."

It hurts me to see this guy say "members of the resistance". Many sectarian folks were hurt. This was not just one way. Shame!

He can't back his claims. He's just looking for some media attention and he shouldn't get it.