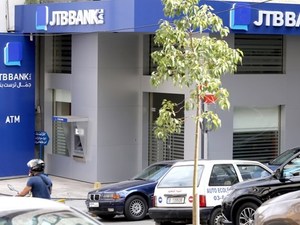 Lebanon's Central Bank announced Thursday it had agreed to the self-liquidation request it received from a bank hit by US sanctions last month over ties with Hizbullah.

On August 29, Washington slapped heavy financial sanctions on JTB, which was accused of acting as a key financial institution for Hizbullah.

The US Treasury said the bank was used for enabling several of the Shiite militant group's financial activities, "including sending payments to families of suicide bombers."

The news agency quoted Salameh as stressing that the value of the bank's assets and of its contribution to the national deposit guarantee body were sufficient "in principle" to pay back all deposits and fulfill obligations.

Iran-backed Hizbullah has been a US-designated terrorist group since 1997 and fights alongside the regime of Syrian President Bashar al-Assad in the neighbouring country's civil war.

It is Tehran's most potent proxy on the regional scene and also wields significant influence in Lebanese politics.

One of a handful of Shiite-owned Lebanese banks, JTB had specialised in micro-credit in remote areas of the country's Shiite-majority south, which is also Hizbullah's heartland.

I'd like to.know which other banks are shi a owned. Is there a list somewhere?
I wouldn't want to use my card in one of their cash dispensers , it would make me illegible to enter the USA because I'd be sponsoring terrorism.

so the shia owned banks are Fenicia Bank, Middle East and Africa Bank, and Lebanese Swiss Bank. Prior to this the Lebanese Canadian Bank was shut down after the Treasury Department accused it of involvement in a money-laundering and drug-trafficking operation with ties to Hizbala. Now the defunct Jammal Trust Bank...

Remember, using their services can potentially get any lebanese barred from entering the USA if they're caught laundering money for the terrorists.