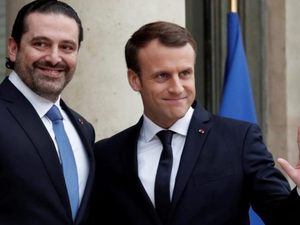 In joint remarks to reporters, Macron affirmed that "France will always remain committed to the security and stability of Lebanon, and to fulfilling its commitments to implementing the CEDRE resolutions."

He revealed that France has intervened to stop the exchange of fire between Hizbullah and Israel.

"The exchange of fire between Hizbullah and Israel at the border at the end of August raised fears that regional conflicts would spread to Lebanon. I intervened at that moment with everyone to avoid any escalation, in coordination with Mr. Saad Hariri. It remains necessary today for everyone to show the greatest restraint," said Macron.

France will also continue to act to ensure that a lasting solution to the Syrian crisis allows refugees to return to their country. We know that this is the ultimate goal. No one should be naive enough to think that this can be solved in a few weeks and to forget the root causes of these displacements."

For his part, Hariri said: "The government of Lebanon has committed to reforms and now is the time to launch investments."

On the security level, Hariri said Lebanon is "committed to the implementation of UNSCR 1701, which has maintained calm and stability on our southern border for 13 years."

Before meeting Macron, Hariri met with French Minister of Economy and Finance Bruno Le Maire. Discussions highlighted the bilateral relations between the two countries, mainly economic matters and the “means of French support for Lebanon," said the Premier's media office.

Informed sources who spoke on condition of anonymity, told al-Joumhouria daily that the Premier plans to persuade Macron of the “positive reformative steps that Lebanon has taken.”

He also plans to relay a positive image about “official Lebanon” and the reform steps achieved so far, rather than the "hard-line" view conveyed to him by his envoy Pierre Duquesne.

The sources added that Hariri exerts strenuous efforts at various levels to make a breakthrough in Lebanon’s economic and financial conditions. He believes the situation has reached “critical levels,” they said.

why is Hariri unshaved? It really is a shameful look.

As I've sated before I hope they don't get a penny from CEDRE as that will only keep the status quo of corruption, unaccounted spending, wasteful spending, bloated bureaucracy or redundant employees, etc... Let it collapse as that's the only way they will reform. Spending money of the problem of spending money you don't have will not solve the problem.

Its another way for Lebanon to get further in debt at the citizens expense. Our Prime Rib cannot balance his own companies check book yet he is placed in a position that makes financial decisions on behalf of Lebanons 4.5MM people (and 1.5MM refugees)

You should have seen the video where this photo used in the article was taken from. He was so uneasy! There’s something in the air...

I am sure his uneasiness comes from the fact that he is a failure and only there due to circumstance and not one from his own doing...