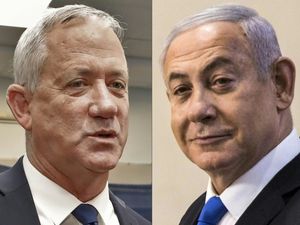 Near-complete official results Friday confirmed a deadlock in Israel's general election this week, putting Benny Gantz's party as the largest but without an obvious path to form a majority coalition.

The results from Israel's election committee showed Gantz's centrist Blue and White with 33 seats out of 120 and Prime Minister Benjamin Netanyahu's right-wing Likud with 31.

Final results will be published on Wednesday, it said, and there could be changes before then.

The committee said the results did not include 14 polling stations where verifications were still ongoing.

Israeli media said that meant 99.8 percent of the votes had been counted.

The third-largest total was the mainly Arab Joint List alliance, which won 13 seats, followed by the Jewish ultra-Orthodox party Shas with nine.

The results have put Netanyahu's long tenure in office at risk.

On Thursday, he acknowledged the results did not allow him to form a right-wing coalition as he hoped and instead called on Gantz to form a unity government with him.

Gantz responded by saying he would have to be prime minister in a unity government since Blue and White was the largest party.

Israeli President Reuven Rivlin plans to begin consultations with all parties voted into parliament on Sunday to decide who to choose to try to form a government.