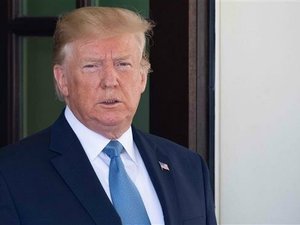 The United States announced Friday that it was sending military reinforcements to the Gulf region following attacks on Saudi oil facilities that it attributes to Iran, just hours after President Donald Trump ordered new sanctions on Tehran.

Trump said the sanctions were the toughest-ever against another country, but indicated he did not plan a military strike, calling restraint a sign of strength.

Those attacks, combined with an Iranian attack on an American spy drone in June, represented a "dramatic escalation of Iranian aggression," Secretary of Defense Mark Esper said.

The Pentagon chief announced that the United States would send military reinforcements to the Gulf region at the request of Saudi Arabia and the United Arab Emirates.

"In response to the kingdom's request, the president has approved the deployment of US forces, which will be defensive in nature, and primarily focused on air and missile defense," Esper said.

However Joint Chiefs of Staff Joe Dunford categorized the deployment as "moderate," with the number of troops not expected to reach the thousands.

Earlier in the day Trump attacked both critics who thought the mogul-turned-president would trigger war and hawks seeking a military response.

"The easiest thing I could do (is) knock out 15 different major things in Iran," Trump said.

"But I think the strong-person approach and the thing that does show strength would be showing a little bit of restraint," he said.

Trump in June authorized a military strike after Iran shot down the US spy drone, only to call it off at the last moment.

Saudi Arabia on Friday revealed extensive damage from the strikes on state giant Aramco's facilities in Khurais and the world's largest oil processing facility at Abqaiq.

The attacks, which knocked out half of Saudi Arabia's oil production, have been claimed by Yemen's Iran-backed Huthi rebels, but Washington has pointed its finger at Tehran, condemning the strikes as an "act of war."

Abqaiq was struck 18 times while nearby Khurais was hit four times in a raid that triggered multiple explosions and towering flames that took hours to extinguish, Aramco officials said.

Aramco flew dozens of international journalists to the two sites to show it was speeding up repairs, giving rare access to the nerve center of the world's largest oil producer as it seeks to shore up investor confidence ahead of a planned initial public offering (IPO).

Meanwhile, Yemen's Huthi rebels, who have repeatedly targeted key Saudi infrastructure in recent months in cross-border attacks, unexpectedly announced late Friday that they planned to halt all strikes on the country.

The move, they said, was part of a peace initiative to end their country's devastating conflict which has killed tens of thousands of people -- most of them civilians -- and driven millions more to the brink of famine.

Iran denies US and Saudi accusations that it arms the Huthis.

The United States already maintains sweeping sanctions on Iran including on its central bank, with anyone who deals with it subject to prosecution, due to Tehran's alleged nuclear program.

But the new sanctions Friday were imposed for the additional reason of "terrorism," Treasury said, adding that Iran's central bank had provided "billions of dollars" to two groups blacklisted by the United States.

"Treasury's action targets a crucial funding mechanism that the Iranian regime uses to support its terrorist network, including the Qods Force, Hezbollah and other militants that spread terror and destabilize the region," US Treasury Secretary Steven Mnuchin.

Iran responded that the move showed that the United States was running out of options.

The United States also imposed sanctions on Iran's sovereign wealth fund, whose board of trustees includes President Hassan Rouhani, as well as Etemad Tejarate Pars, a company that the Treasury Department said had sent money internationally on behalf of Iran's defense ministry.

Trump recently said that he hopes for talks with Rouhani, who responded that Trump must first ease sanctions.

Last year Trump pulled out of a nuclear accord with Iran negotiated under former president Barack Obama, sending tensions soaring as he tried to stop all countries from buying Iran's oil.