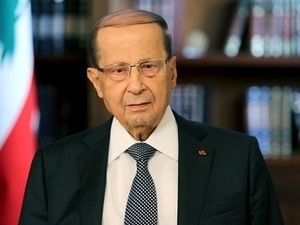 President Michel Aoun will head to New York next Sunday amid fears that Lebanon will be threatened by an escalating military confrontation between the United States and Iran, along with the Syrian displacement crisis and the collapsing economic situation, the Saudi Asharq al-Awsat newspaper said on Saturday.

A source close to Aoun told the daily, the President’s speech on Wednesday before the United Nations in New York "is of particular significance because of the pressing issues he will raise, mainly the Israeli violations of resolution 1701,” that reached the southern suburbs of Beirut.

Aoun “will urge the international community to persuade Tel Aviv to stop its air, land and sea attacks on Lebanon and to abide by resolution 1701." He will also thank the United Nations for keeping its troops in southern Lebanon to deter Israel, and for extending their mandate without modification, said the sources.

The President will focus on the importance of sparing the Middle East and Gulf from any military confrontation between Washington and Tehran, after the attacks targeting some of the oil facilities of Aramco.

The file of Syrian refugees in Lebanon will also be a main concern for Aoun. He will ask for support to reduce the number of displaced Syrians, in light of the economic repercussions on Lebanon as a result of their continued unprogrammed distribution.

The second part of the week-long visit to NY, Aoun will hold a series of summits with his counterparts, the most important of which is with French President Emmanuel Macron.

The sources said that Macron “may be the only president in addition to Iranian President Hassan Rouhani, who can spare Lebanon from being part of any confrontation between the US and Iran.”

What utter nonsense you continue to write.

My second favorite shia troll of all times.