Tens of Thousands of Yemenis Demonstrate Against Regime 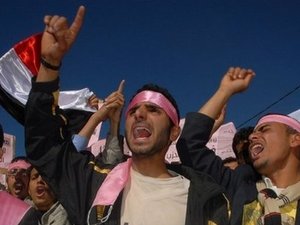 Tens of thousands of protesters massed on Thursday at Sanaa university for a "day of rage" against Ali Abdullah Saleh's rule, while a similar number of loyalists flooded a central square in support of the embattled Yemeni president.

With Saleh supporters, some of them armed, taking over Al-Tahrir square from Wednesday night, protest organizers were forced to change the planned venue of their demonstration.

From early morning they drove through the streets advertising the new site over megaphones, blaming the change on the fact that "the men of the ruling party and their armed elements are holding Al-Tahrir."

By mid-morning tens of thousands of protesters had gathered at the university, with a similarly-sized crowd of loyalists massing at Al-Tahrir, about 2 kilometers (1.2 miles) away, in the center of the capital, correspondents said.

Police were on Thursday trying to filter the influx of people into the square, some of whom carried banners reading, "We are with Ali Abdullah Saleh. We are with Yemen," and "The opposition wants to destroy Yemen."

Facing demands for him to quit, Saleh on Wednesday announced that he would not seek another term as president, and said he will freeze plans to change the constitution that would have enabled him to remain president for life.

He also said he was opposed to hereditary rule, a response to suspicion among critics that was grooming his eldest son Ahmed Saleh, who commands an elite unit of the Yemeni army, to succeed him as president.

In what appeared to be yet another bid to stave off the kind of mass anti-regime protests that have swept Tunisia and Egypt and which have rippled throughout the Arab world, Saleh also announced he would postpone controversial elections due in April.

Unimpressed, opposition groups said they would press on with their "day of rage."

Mohammed al-Sabri of the Common Forum opposition alliance said Saleh's call to halt protests was "unacceptable." However, he said the group would "discuss the president's announcement."

There have been clashes during previous protests against Saleh, including on January 29, when dozens of activists calling for his ouster fought with regime supporters in Sanaa. Plain-clothes police also attacked demonstrators.