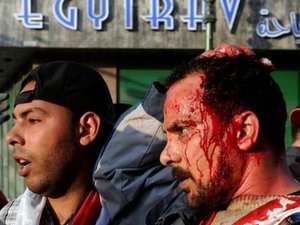 "All (four) were killed by gunshot, with one hit in the head," said Dr. Mohammed Ismail, at a makeshift clinic in Abdulmenem Riad Square, next to Tahrir (Liberation) Square, taking the death toll over the past 24 hours to seven.

"Most of the casualties came in the last three hours, many with gunshot wounds," he told Agence France Presse early morning, putting the total wounded toll since Wednesday at more than 1,000 people.

The gunfire came after backers of Mubarak stormed the Cairo stronghold of anti-regime protesters Wednesday afternoon, sparking clashes in which the government said three people were killed.

The two sides fought battles with stones and Molotov cocktails through the night and into Thursday morning, with many of the square's paving slabs torn up and broken into fist-sized projectiles which now carpet the area.

Soldiers deployed around the square have retreated into their tanks and armored personnel carriers, after a hail of rocks rained down on them for hours on Wednesday.

With the death toll rising, the U.S. State Department issued a stark travel warning for citizens in Egypt, urging those who want to leave to "immediately" head for the airport, adding that any delay was "not advisable."

Washington, which has called for restraint since demonstrations broke out 10 days ago, deplored the violence against "peaceful protesters" while U.N. chief Ban Ki-moon said the attacks on demonstrators were "unacceptable."

The State Department said Clinton had called Suleiman, telling him the violence "was a shocking development after many days of consistently peaceful demonstrations."

"The secretary urged that the government of Egypt hold accountable those who were responsible for violent acts," the State Department added in a statement.

The European Union added its voice Wednesday to calls from U.S. President Barack Obama for the transition from Mubarak's three-decade-long rule to begin immediately after the veteran president announced late on Tuesday that he would not seek re-election in September.

Correspondents, photographers and cameramen reporting on the fierce clashes in Tahrir Square said that the Mubarak supporters were hostile to the press.

Media watchdog group Reporters Without Borders (RSF) said the "shocking" attacks appeared to be in revenge for the coverage of the protests.