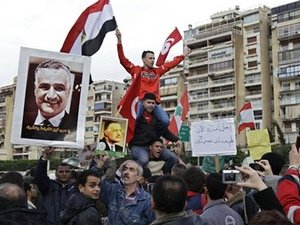 Egyptians in Lebanon are anxiously watching developments in their strife-torn homeland, fearing that their country is sliding into an unending cycle of chaos and political turmoil.

"All I can think, watching the protests, is that we are going to be the next Lebanon or even the next Iraq," said Shahta al-Masri, a Beirut gas station attendant who hails from Al-Mahalla Al-Kubra in the Nile Delta.

"In Lebanon, everyone is always afraid that the bombs will return," an allusion to a country that suffered a civil war from 1975-1990 and a conflict with Israel just five years ago.

"All I can say is I am glad my family does not live in Cairo," added the 36-year-old father of three.

Demonstrators have flooded the streets of Egypt's capital and other cities since January 25 in increasingly heated protests against President Hosni Mubarak, who has ruled unchallenged for three decades.

Lebanon, a country with an estimated four million people, is home to some 50,000 Egyptians, according to an Egyptian embassy official, many of whom are smuggled in illegally.

Unable to find work in their native country, or unable to survive on a minimum wage that has stood at $6 a month since 1984, they turn to Lebanon for employment in blue-collar jobs in gas stations, hotels and bakeries for as little as $200 a month.

Today, they too are divided as they watch their capital sink into turmoil. But whether they laud or loathe Mubarak, all appear united in the fear that Cairo could turn into another Beirut or even Baghdad.

"What is happening today is a coup against the Egyptians themselves," said Wageeh Gerges, a 53-year-old concierge and ardent Mubarak supporter.

"I've been living in Beirut for 20 years, and I know what instability is like," Gerges, a Coptic Christian, told AFP.

"It was a big enough mistake that these young so-called democracy supporters thought they could humiliate Mubarak and kick him out of a country he built," added Gerges, who is married to a Lebanese and has three children.

"Who is going to step in now? The Americans? Islamic rule?"

Mohammed Ihab, a 28-year-old who has worked at a Beirut gas station for four years, echoes his support for the embattled president.

"The best thing for Egypt was Hosni Mubarak," Ihab said. "I watch the protests on television and I think to myself, this is not Egypt.

"What is Egypt without its spine -- Mubarak?" he questioned. "There is nothing more to say."

However, others are looking forward, though not without apprehension, to the day the 82-year-old Mubarak finally steps down.

"We were not happy under Mubarak in so many ways," said Izzat, a hotel bellboy in the Lebanese capital.

"We had been hungry for so long," said the 34-year-old, whose wife and four children live on the outskirts of Cairo.

"It was impossible to feed your kids and send them to school, and every time someone spoke up, they were beaten or thrown in prison.