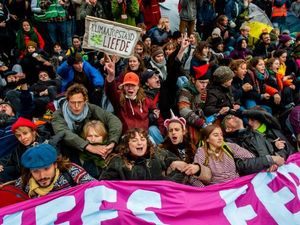 Climate protesters from Sydney to London blocked roads on Monday, sparking arrests as they kicked off two weeks of global protests demanding immediate action to save the Earth from "extinction".

Marching with angry slogans or sitting down in the road and even chaining themselves to vehicles, crowds defied police in a wave of demos in major cities, also including Berlin and Amsterdam.

The year-old Extinction Rebellion group has energised a global movement demanding governments cut the carbon emissions that scientists have shown to cause devastating climate change.

They are backed by Greta Thunberg -- the Swedish teenager whose searing address to the United Nations in September made international headlines -- and by academics studying climate change.

Their civil disobedience has irritated drivers and some officials but raised the hopes of those who see warming global temperatures and rising sea waters as a threat to the planet.

In Australia, hundreds of people joined a sit-in on a busy inner Sydney road before being dragged away by the police. Thirty people were later charged.

"We have tried petitions, lobbying and marches, and now time is running out," Australian activist Jane Morton said.

"We have no choice but to rebel until our government declares a climate and ecological emergency and takes the action that is required to save us."

Thirty more people were arrested in New Zealand's capital Wellington after halting traffic by chaining themselves to a bright pink car.

There were also protests in India's capital, New Delhi, which choking smog from traffic congestion has made one of the most polluted cities in the world.

The epicentre of past actions has been London -- the movement's birthplace.

A small group pulled up a mock nuclear missile outside the defence ministry building there on Monday.

Extinction Rebellion said it was setting up 12 protest sites near government offices in central London that could block access to parliament and the prime minister's office.

The disturbances came at a delicate time in Britain as the government plans to leave the European Union on October 31.

Some protesters banged drums and lay down in the middle of streets during the morning rush hour.

"We've got to make radical changes and the government are just not on it -- they're just banging on about Brexit," said Harriet Thody, 53, a mother of two from Cornwall, southwest England, as she sat in the road.

Further protests were planned in 60 cities around the world, including Buenos Aires and Cape Town.

Two are planned in the United States -- in New York's Battery Park a few blocks from Wall Street and in downtown Chicago -- and one in Toronto.

The movement is partially credited with pushing the UK government in June to become the first in the Europe Union to commit itself to a net-zero target for harmful emissions by 2050.

But now Extinction Rebellion is demanding governments reach that target by 2025.

There has been less movement in other parts of Europe or across Asia, where lung-clogging pollution forces many to commute wearing white surgical masks.

At the weekend, hundreds of activists barricaded themselves inside a Paris shopping centre for hours.

Groups unfurled banners with slogans such as "Burn capitalism, not petrol" above restaurants and fashion boutiques.

Hundreds brought blankets and sleeping bags to one of the main roundabouts in central Berlin which police expect to be shut down for many days.

Dutch police said they had arrested 50 people after Extinction Rebellion protesters occupied a bridge outside the famed Rijksmuseum art gallery.

Extinction Rebellion's tactics in Australia prompted senior conservative politicians to call for protesters' welfare payments to be cut and for public denunciations.

Sydney assistant police commissioner Mick Willing accused protesters of putting themselves and others at risk, warning that such disruptive protests in the future would "not be tolerated".

In London on Sunday, protesters alleged the police had been ordered to seize tents, toilets and other equipment as part of what it said were "pre-emptive tactics" against them.