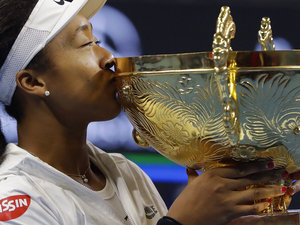 An emotional Naomi Osaka said that she had atoned for the disappointment of the US Open after beating world number one Ashleigh Barty in the China Open final on Sunday.

In the men's draw, top seed Dominic Thiem recovered from a set down against Stefanos Tsitsipas to claim the 15th singles title of his career.

The 21-year-old Osaka has had a turbulent year, winning the Australian Open but then suffering a dip in form which included exiting Flushing Meadows in the last 16.

But the two-time Grand Slam champion from Japan surged back to win her home Pan Pacific Open last month and made it back-to-back titles with victory in Beijing.

Osaka defeated teenage US Open champion Bianca Andreescu and then French Open winner Barty on the way to the fifth crown of her young career.

Winning in Japan and China had been her aim after the US Open letdown, where she was the defending champion and top seed.

"I don't want to say I planned (it), but I really meditated on it. It just feels like I accomplished what I set out to do," she said.

"I didn't play those two tournaments for myself, I kind of played them for my team because the US Open wasn't that great and I felt very apologetic."

But Osaka admitted that she had been driven to tears after going down in the first set to Australia's Barty, before powering back to win the final 3-6, 6-3, 6-2.

"In the first set all I could think about was how much I wanted to win and I was pretty emotional," said the former number one, now ranked fourth.

Among the changes after the US Open, the young Japanese brought her father Leonard Francois on board as her coach.

It has proved successful in a short time but Osaka does not see it as a long-term arrangement.

"He doesn't like watching my matches. I think it stresses him out because he twitches every time I hit a ball," she smiled.

The beaten Barty said that her slice shot, a major weapon of the Australian's, was "nullified" because of the cool conditions in the Chinese capital.

"Proud that myself, my team, we turn up for every single tournament, regardless of when it is during the year, what the conditions are like."

The Australian, who took a break from tennis five years ago and played cricket instead, is relishing more showdowns against Osaka and Andreescu, two other major talents.

"I think it's an exciting opportunity for all three of us," she said.

The 26-year-old Austrian beat former world number one Andy Murray on the way to the title and had also booked his spot in the prestigious season-ending ATP Finals.

"It feels great because today was for me one of the best matches I've played in my life, I guess," said Thiem, who is ranked fifth in the world.

"Game-style wise and also how I came back, it's definitely one of my biggest titles because the tournament is so strong, the draw was so strong.

"Makes me very happy that I stand as the champion at the end of the week."