Pollution App Pulled in Vietnam after 'Coordinated Campaign' of Abuse 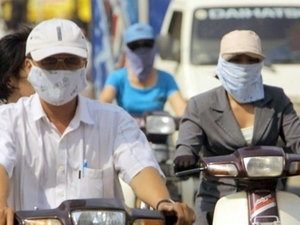 A leading air quality monitoring app was removed from Vietnam's Apple and Google stores after it said it was attacked in a "coordinated campaign" for posting pollution data from the country's smog-choked capital.

AirVisual's Facebook page was also taken down in Vietnam after a deluge of messages from users accusing the site of publishing unreliable data in a bid to sell its products.

The Swiss-based air monitoring firm AirVisual said Monday it was bombarded with negative comments online as part of a "coordinated campaign in Vietnam".

"AirVisual has received abusive and threatening messages posted on Facebook and on the Apple App Store and Google Play Store," the company said in a statement.

The company was hit with online abuse over the weekend from users accusing it of publishing fake data.

"AirVisual is a company selling expensive face masks and air purifiers, for sure they got a lot of money in Vietnam over the last week," Facebook user Vu Khac Ngoc wrote in a post Sunday shared more than 7,400 times.

"Poor application, incorrect data. Does not differentiate between dust and fog," Han Phung wrote in the Google Play store.

Online abuse in support of the government is common in Vietnam, with so-called "Red Flag" trolls frequently attacking activist pages and posting patriotic content on Facebook and YouTube.

Countries across Southeast Asia have seen a steady rise in air pollution in recent years thanks to the growth of carbon-heavy industries, vehicle emissions, agricultural burning and construction dust.

The city's air quality index (AQI) reached above 150 -- unhealthy -- for several days in a row, making it at certain points the most polluted city on AirVisual's list of 90 major cities.