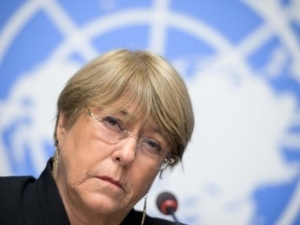 The UN's top rights official urged Australia to reform its criminal and refugee detention systems on Tuesday, just days after the country's prime minister took a veiled swipe at the international body.

Speaking in Sydney, United Nations Human Rights Commissioner Michelle Bachelet said she had been "shocked" to learn that the country's age of criminal responsibility was just 10 years old, calling on Australia to raise the age to the "internationally accepted level" of 14 years.

The policy disproportionately affects indigenous children, who make up 70 percent of those aged under 14 held in Australian jails.

She also said it was "time to roll back" the mandatory detention of asylum seekers, a policy she described as becoming "entrenched" under successive governments.

Australia's hardline approach to asylum seekers includes turning away refugees arriving by boat and offshore detention. Both measures have been condemned by the UN previously.

"I encourage Australia to make greater use of human rights-compliant alternatives to detention, which are non-custodial and community-based," Bachelet said.

"We should avoid any reflex towards a negative globalism that coercively seeks to impose a mandate from an often ill-defined borderless global community," he said.

Morrison went on to declare that the government "can never answer to a higher authority than the people of Australia".

The comments have widely been interpreted as a swipe at the UN.

Bachelet did not address the prime minister's statements directly, instead rebuking Australian commentators who suggest "the UN human rights machinery should focus its attention elsewhere".

"This scrutiny is not the function of some international policing system enforcing rules from outside," she said.

"It is based on international standards that Australia has helped to create, which successive Australian governments have voluntarily adopted."

Bachelet also called on Australia to enshrine comprehensive human rights protections in law and introduce constitutional recognition of Aboriginal and Torres Strait Islander people, two proposals that have been the subject of much debate Down Under.