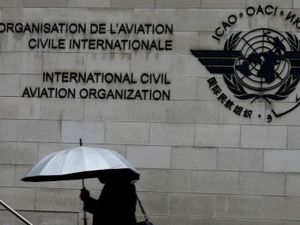 International aviation officials meeting in Montreal pledged on Monday to step up their efforts to limit carbon emissions over the long-term, despite pushback from China and Russia, the ICAO announced.

The 193 member countries of the International Civil Aviation Organization (ICAO) "committed to working" on setting a 2050 target for curbing airline CO2 emissions, a source close to the talks told AFP.

But they put off taking a decision until their next meeting in 2022.

ICAO delegates also reaffirmed their support in a 92-25 vote (and 10 abstentions) for a global CO2 offsetting mechanism agreed at their 2016 meeting, called Corsia or Carbon Offsetting and Reduction Scheme for International Aviation.

China and Russia, backed by India, demanded a secret ballot on the motion. They believe that Corsia penalizes developing countries.

"The Europeans and in particular France ran up against a coalition led by China and Russia, which limited expected advances," France's Secretary of State for Transport Jean-Baptiste Djebbari said in a statement.

Under Corsia, airlines will have to stabilize their emissions from 2020. From 2021, they would have to purchase carbon credits to offset emissions exceeding these levels.

Until the end of 2026, membership in the mechanism is voluntary.

In parallel with Corsia, airlines and manufacturers in 2009 set themselves the goal of halving emissions by 2050 from 2005 levels.

The ICAO gathering was briefly interrupted on September 27 by a climate march near its headquarters in Montreal led by teen activist Greta Thunberg.