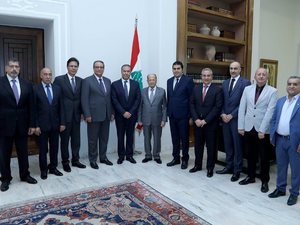 President Michel Aoun on Tuesday met in Baabda with a delegation from the Money Exchange Union in Lebanon over local worries that Lebanon's dollar-reliant currency is losing value for the first time in more than two decades.

The National News Agency said that Aoun has urged money exchange shops to safeguard the country’s higher interest and “not damage” its financial and economic reputation. He stressed keenness for a free economic system in Lebanon.

Elias Srour, head of money exchange houses in Lebanon, said that “Aoun assured us that Lebanon's economic policy is free and subject to supply and demand. We in return assured him that we, as exchange houses, are committed to all applicable laws and the country's financial reputation concerns us.

“Liquidity is available and the dollar is available in the country. Shipping companies are shipping large amounts of dollars, there is no need to panic,” added Srour.

Many Lebanese have been rushing to exchange shops in recent days to convert their local currency into dollars over worries that Lebanon's dollar-reliant currency is losing value.

Last week, $1 could be purchased for 1,650 Lebanese pounds at exchange shops, after the currency had been stable at 1,500 to the dollar since 1997. Although the official price is still pegged at 1,500 pounds to the dollar, people find it difficult to get hard currency at this rate from local banks.

Ban and outlaw money exchange shops. They serve no purpose but to scam people

Not true, the true scammers are the banks. The exchange shop I always go to sells me dollars for less than banks. I must admit, it’s been over a year the guy has been telling me there are no dollars. He never tried selling me some for more than the regular market price which is 1507-1510 LL

Lebanon might be the only country in the region that has these money exchange shops. I agree they should be banned. If not, why aren't they being taxed for the profit they make. That's a cash cow right there. They need to be regulated just like any other.

rabiosa, these places wouldn't exist in the first place if banks weren't doing huge margins on currencies. The only thieves here are the banks who should be forced to buy and sell at the official market price.

I'm against empowering banks because they're the ones who are behind lebanon's shortage of dollars, they are the ones offering crazy interest rates on deposits and it's irresponsible.

"Harm Lebanon's reputation"???
Aoun certainly did a great job at that for decades...